It's time for the monthly (dev)log! You can support the game and play the monthly beta builds via patreon <3 This might just be the chonkiest update so far, so here's a quick changelog for starters, and a preview video: 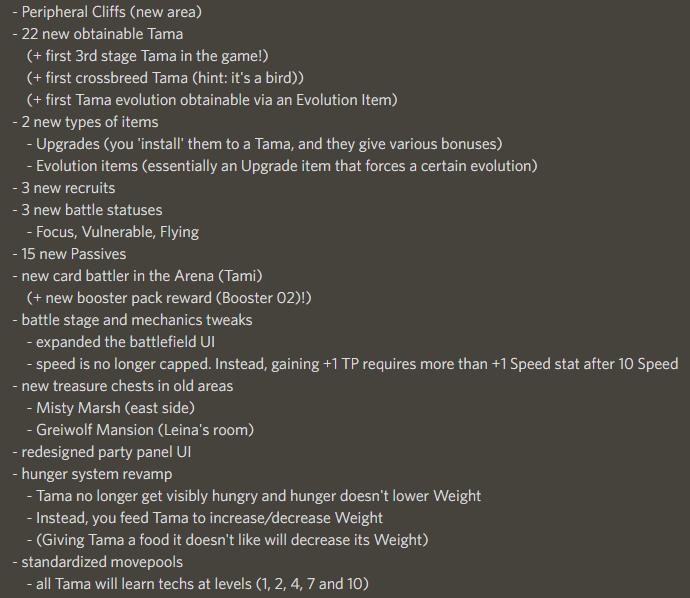 Main focus of this (previous) month were the Cliffs. It's a large, rocky area with Earth, Wind and Fire (and some Machine) Tama catchable in the wild. As far as monster types go, there are dinosaurs, lizards, birds and dragons.  It's also a first area to have quests that give Tama as rewards. So let's go through some of them! 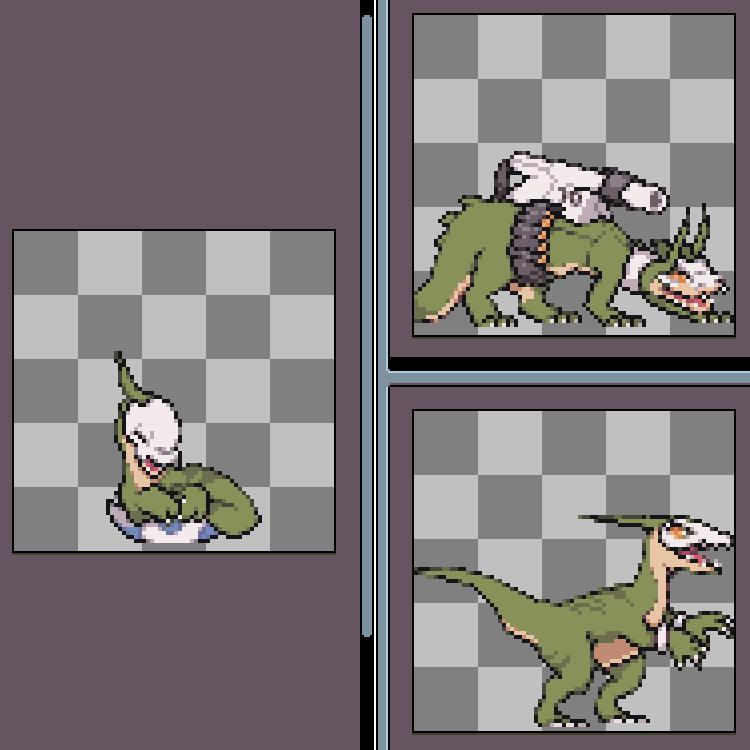 Next up, we have some new birds.

Hexou / Element: Wind
-> Hexyr
-> Brewhyr
The hex birbs! Some of their techs are able to lower foe's defenses via the Vulnerable status. 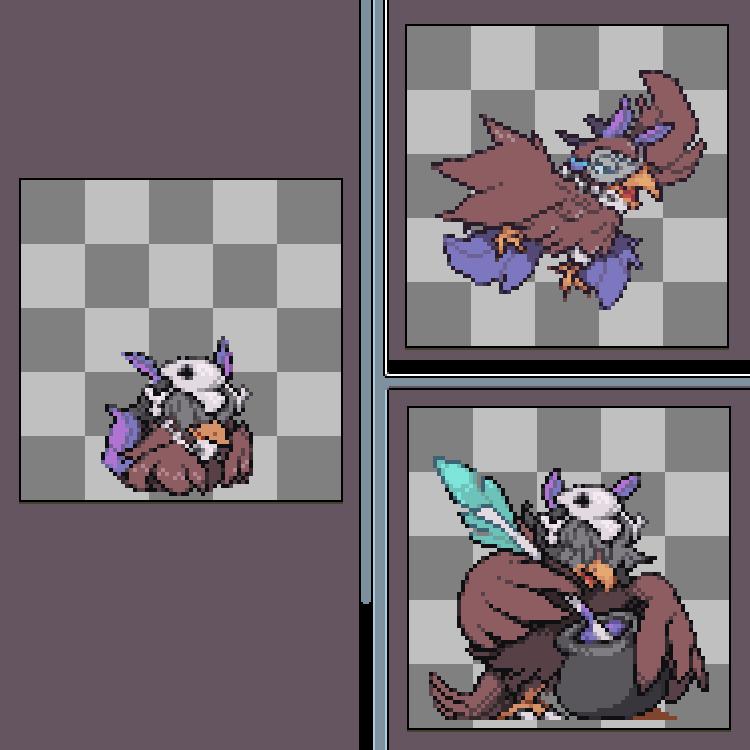 Vulou / Element: Wind
-> Vulhyr
The new vulture birbs! Vulhyr has a special passive and moves that give it Focus. This new status increases its crit. hit chance as well as accuracy. However, unlike other statuses, it goes down by 2 at the end of each turn

Finally, I'll show Vixee / Vixel, the first obtainable Neutral-type Tama in the game so far! She learns healing moves and her passive gives her extra Recovery on each effect that gives that status.

Next, v0.4 introduces a new type of item and a new way to attain evolution. Upgrade items are essentially equip items, but each Tama can equip up to 5 of them at once, and they disappear if they are unequipped. If you reinit or breed, however, they get passed on. 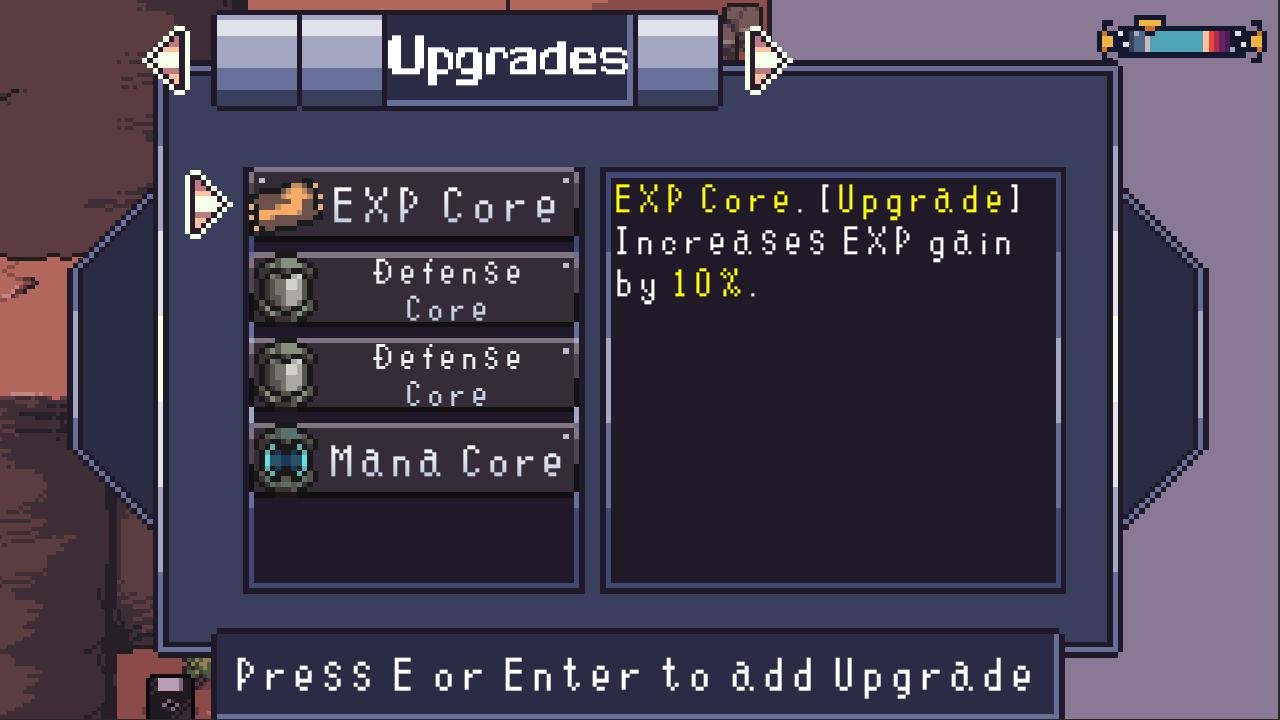 Evolution items are also upgrade items, and they force a certain evolution on a Tama. Skeltyr can only be obtained by using an evolution item on a Talfou. 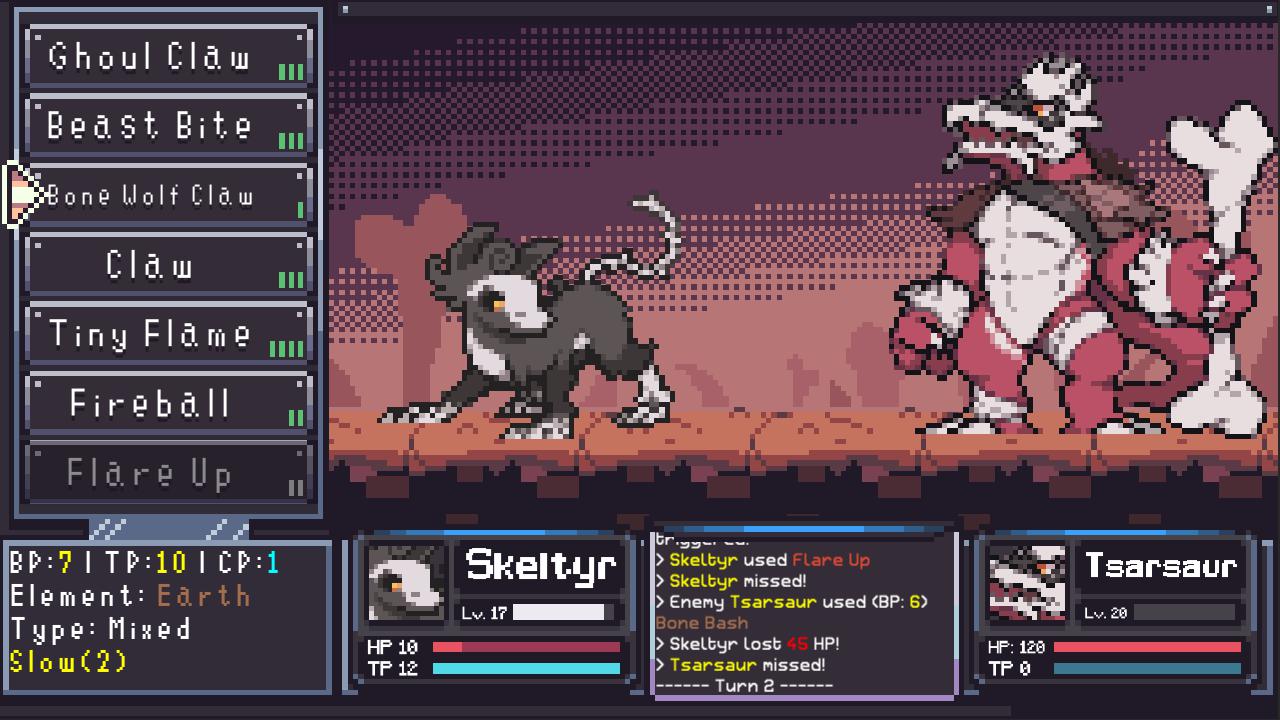 One non-mechanical thing that was changed in this version is the party screen UI. It's now more streamlined and only shows the most relevant info. Defense percentages measure damage absorption; e.g. 44% MDef would mean that you absorb almost half of damage coming in from Magic attacks. 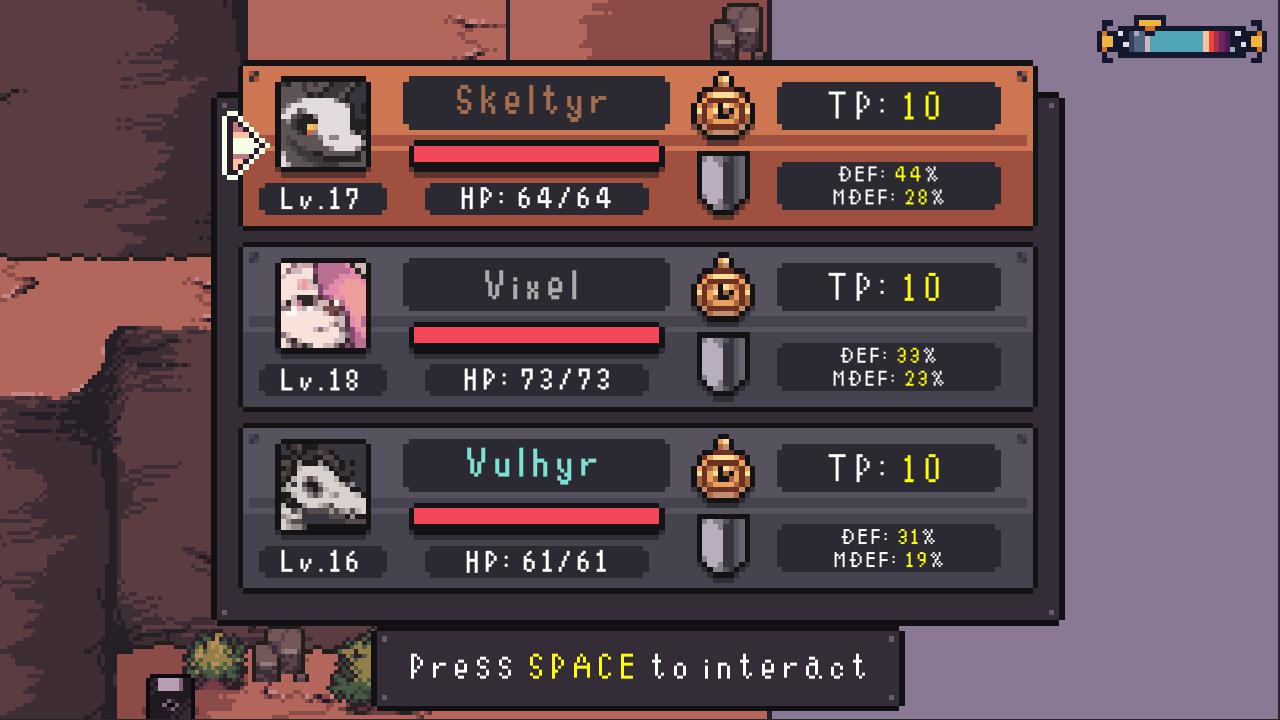 Hunger system has also been tweaked. Hunger no longer shows up on the HUD, and it no longer affects weight. Instead, to decrease the weight of your Tama, you need to feed it foods it doesn't like. (For example, feeding Talfou a carrot.) ((A cruel thing, but sometimes it's necessary for scientific progress.))

Finally, there are 3 new recruits in the cliffs area. Hearts, who joins as the new town shopkeeper after you clear his quest. Quill, who unlocks fast travel to already visited areas. And Sthelios, an oonga boonga dino man. 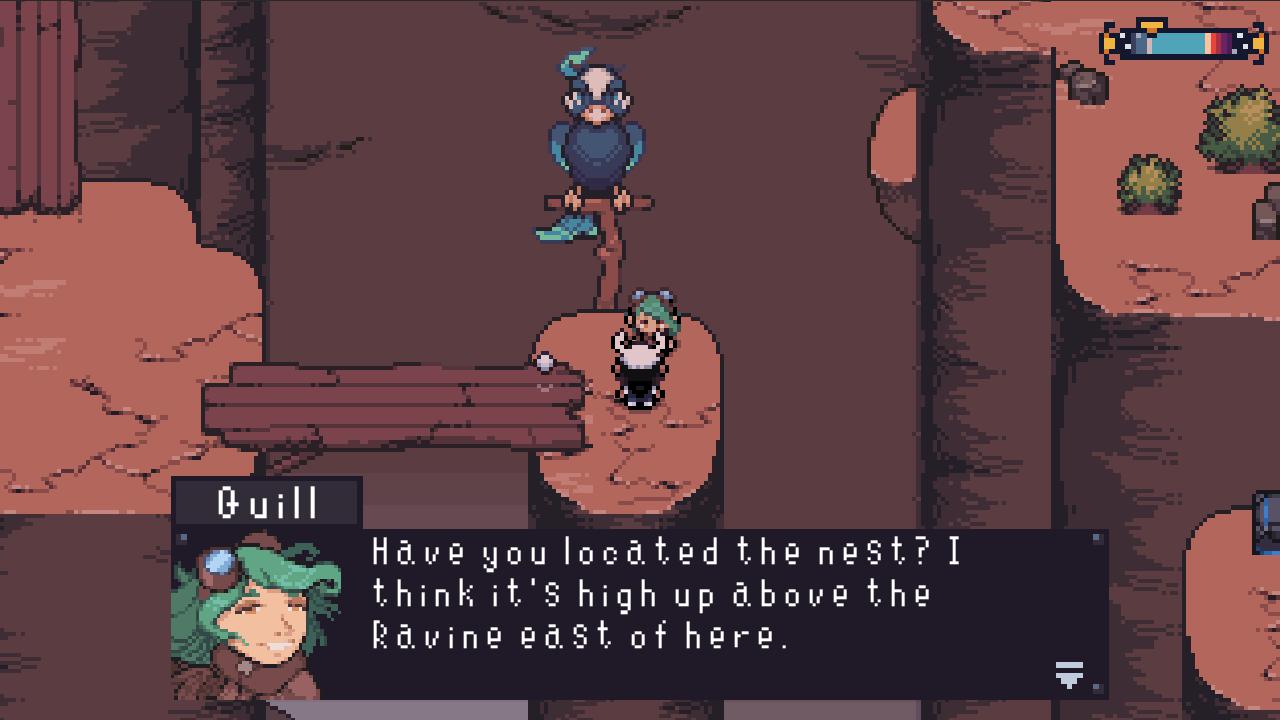 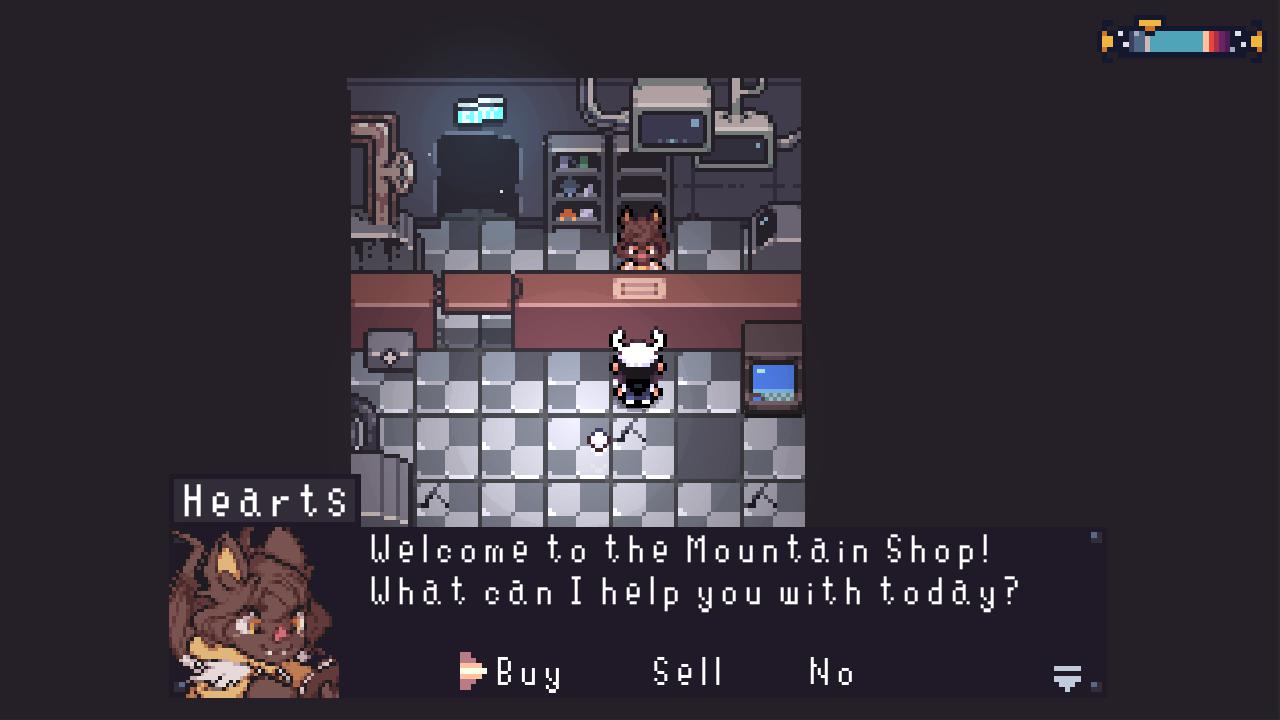 That's about it for this (previous) month. I'll focus on general improvements and tweaks to existing mechanics in June. I have yet to decide whether to start developing a new area or to do PvP if you have preference, let me know in the comments or in the Discord! P.S. Options for next area to implement are *) Scorching Desert, *) Protocol Forest, or *) Rain City.